A new blog is well overdue but I’m not very productive or innovative at the moment so I am sharing something I did two nights ago after seeing a new you tube video from “Rebecca from Chemknits“:

The first thing I learned was that what I, an Australian, call a brown onion seems to be called a yellow onion in the USA.  I’d often seen yellow onions in American cooks’ recipes and simply substituted brown ones.  Turns out that was quite OK!

Secondly, Rebecca actually weighed her onion skins.  Never thought of doing that.  They colour natural fibres  so well that eye-balling the quantity I put in the pot seems to work just fine. Still, out of interest I weighed the two bags of skins I’d pulled out of the stash in the garage; 92g.  (I could put in an image here but I’m assuming that everyone knows what onion skins look like even if they are very brown-looking yellow ones).

While I was in technical mode I put the said 92g into a pot with 3.5 litres of water.  There was nothing more rational about that than it’s how much tap water fitted into the pot comfortably and covered the skins. I then brought the pot to the boil and simmered it for an hour. The liquor was looking very red by then and the skins very soft, although I’m sure they’d have yielded more colour if I’d simmered them again  in some fresh water.  I really don’t need to do that as I accumulate plenty of onion skins (both red and brown) from my cooking and they aren’t recommended for the compost where my other vegetable peelings go.

I found a clean silk scarf which had been used in an unsuccessful botanical printing session.  So unsuccessful was the attempt that I couldn’t see anything much on it.  It did look a bit the worse for wear though!

After straining out the used skin material, I brought the onion dye bath back up to simmer.

Instead of using my usual “dunk straight in and stir around a bit” technique, I decided to imitate Rebecca from Chemknits’ dip dyeing method.  I am a fan of her video tutorials and have seen her do it many times with yarn.  Why not see if it works on a piece of fabric?

So, let’s get to the point. It does work!

The image below conceals one thing. There must have been some action by the tannin in the onion skin bath that brought out previously concealed marks from the printing attempt.

After washing in baby shampoo, the onion aroma disappeared.  The scarf is quite wearable now but I’m tempted to print over it sometime. 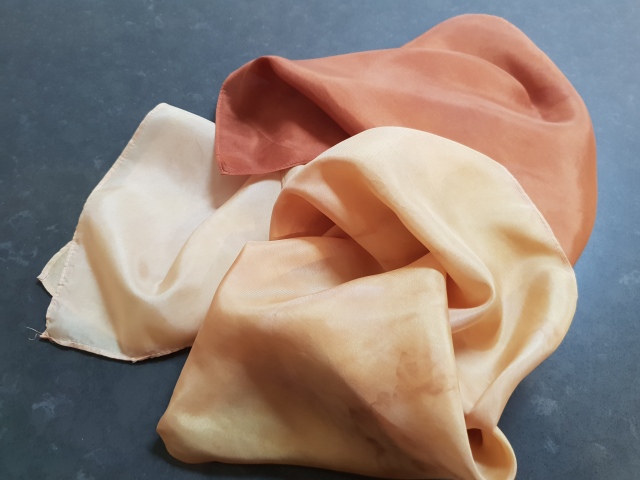 This entry was posted in brown onion as dye, Natural dyeing, Scarf. Bookmark the permalink.